We Need American Revival...and we need it now.

We Need American Revival…
…and we need it now. 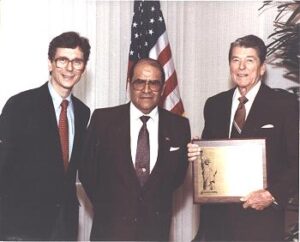 Ronald Reagan knew that and called regularly for it. I was lucky enough to hear him do it personally when a group I founded gave him a Teach Freedom Award. We gave it to him to honor his farewell warning to the American people as President of the United States on January 11, 1989.

He warned us then of the real danger that one day we as Americans might forget who we are as a nation. (The popular culture forgot America a long time ago, and increasingly they are dragging the country down — especially our youth.)

Listen to Reagan describe our situation in that farewell speech: “If we forget what we did, we won’t know who we are. I’m warning of an eradication of the American memory that could result, ultimately, in an erosion of the American spirit. Let’s start with some basics: more attention to American history and a greater emphasis on civic ritual. And let me offer lesson number one about America: All great change in America begins at the dinner table. So, tomorrow night in the kitchen I hope the talking begins. And children, if your parents haven’t been teaching you what it means to be an American, let ’em know and nail ’em on it. That would be a very American thing to do.”

Those who know my media work know that I am a “Reagan Democrat.” A former Democrat, President Reagan represented so much of what my party used to be. He talked about the need for “a new patriotism.”

As I wrote in my 2009 WND column “Tea Party: We’re Reagan’s New Patriots,” President Reagan “didn’t call us to hope for more government, as President Obama does. Government wasn’t the solution, as Reagan said over and over. Government was the problem, especially when led by “big government” liberals – whether Democrat or Republican. Reagan’s hope was rooted in greater things. He believed in our traditions of limited government and free markets. He believed in an ‘Under God’ America, and yes, a strong America. And he believed in the American people, not because we were special, but because we were uniquely free – and that made us special.”

Stop and think about all the attacks on the Tea Party, and then think about Ronald Reagan and the battles he also fought against the left. Reagan endured the same basic criticism, the same contempt, and the same fear-mongering — a good thing to remember in the coming years.

I leave you with my favorite Ronald Reagan quote: “God Bless America.”